All India Coordinated Research Project on Oilseeds (AICORPO) was established in the year 1967 based on the recommendations of a special committee constituted by ICAR, with an objective of a systematic and mission-oriented research programme to increase the oilseed production. Initially there were five crops in the ambit of project i.e., groundnut, rapeseed-mustard, sesame, linseed and castor.

During IV Plan period (in 1972) three more crops viz., Safflower, Sunflower and Niger were added to the project. Realizing the need for a strong leadership at the national level for the oilseeds research, the project was upgraded to the level of Project Directorate in August 1977 with Project Director as its head at Hyderabad who was assisted by 7 Project Coordinators,  during IX Plan period.  Later, Groundnut and Rapeseed-Mustard were delinked during 1979 and 1993, respectively with the establishment of respective National Research Centres (NRCs), which were upgraded to DGR, Junagadh, and DRMR, Bharatpur.   Realising the potential of soybean in augmenting the oilseed production in India, the National Research Centre for Soybean was established at Indore during 1987 which was upgraded as IISR during 2015.

Based on the recommendations of H.K. Jain Committee constituted by ICAR, Linseed, Sesame and Niger were delinked from DOR from April, 2000 with separate Project coordinating units at Kanpur and Jabalpur headed by Project coordinators. The Project Coordinator's position of Castor, Sunflower and Safflower were abolished and the Project Director of the DOR was given the responsibility to coordinate and monitor the activities of these programme with effect from 01.07.2001. The Directorate of Oilseeds Research was upgraded to Indian Institute of Oilseeds Research from 3rd February, 2015 with the additional mandate of doing basic research on sesame, niger and linseed.

Based on the AICRP review committee recommendations of 2018, there is a proposal to bring AICRP- Sesame & Niger again under IIOR from 01.04.2020 (to be implemented). 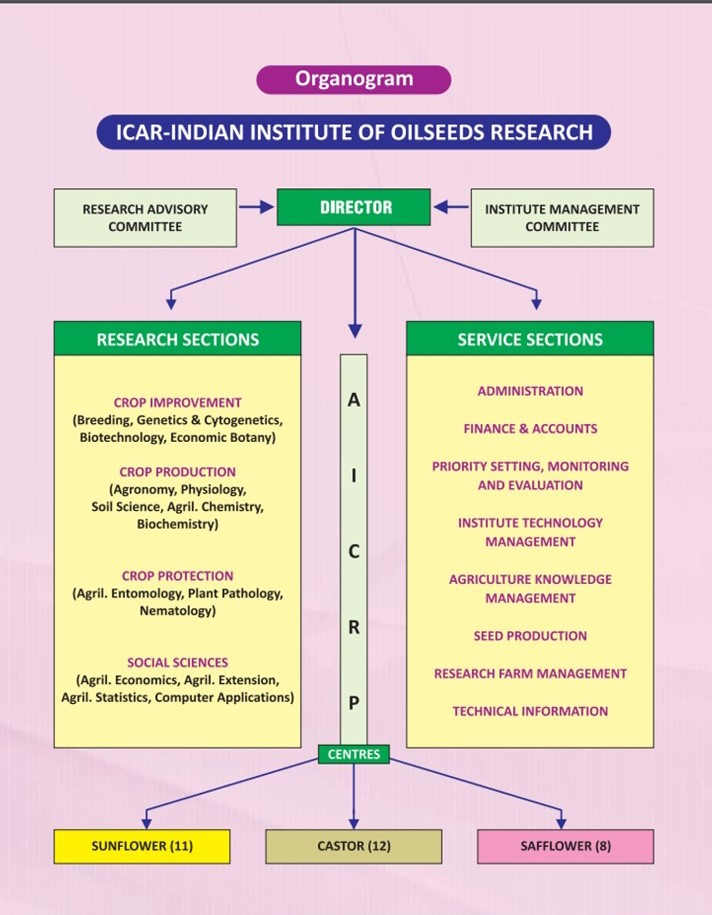